Concert in the Park – Mark Wayne 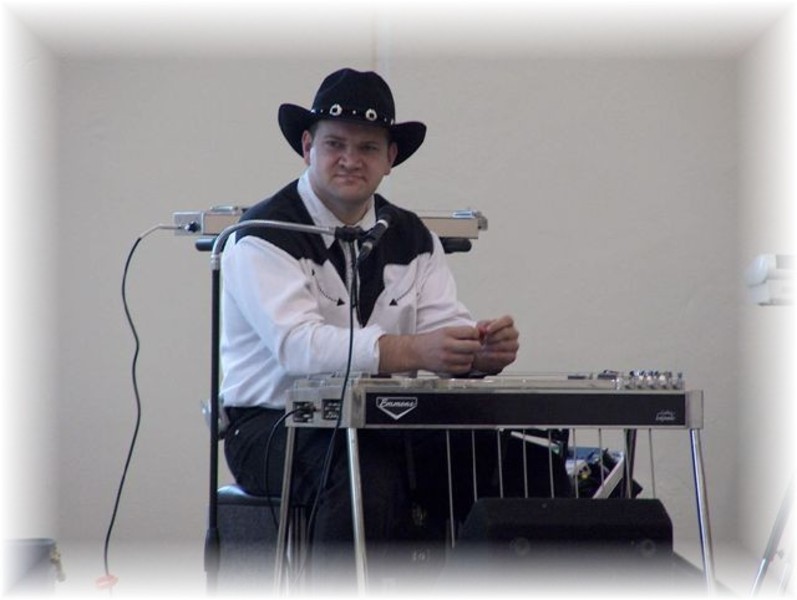 MARK WAYNE BRINGS STEEL GUITAR TO THE THREE LAKES CONCERTS IN THE PARK
Mark Wayne returns to the Three Lakes Concerts in the Park on Tuesday evening, July 6, at 7 PM. The performance will feature live vocals and live pedal steel guitar classic hits from favorite performers of the 20th century.
Mark Wayne performs the styles and songs of Elvis, Frank Sinatra, Josh Turner, Patsy Cline, Marshall Tucker, Merle Haggard, Waylon and Willie, Mary Robbins, Crosby, Stills, and Nash, Dire Straits, and much, much, more. He is especially known as a Johnny Cash impersonator.
Born in Beaver Dam, WI, in 1969, he started playing guitar at 11, and steel guitar at age 12. From 1999-2006, Mark toured with the Nashville Recording artists’ “Harbor Lighthouse,” and has won national awards as a steel guitarist.
He has been the producer of Clear Blue Studios and Clear Blue Entertainment since 1996. Mark is now a performer and entertainer, combining vocals and steel playing with original, custom-made rhythm tracking from his studio. Mark has also performed with The Skip Wagner Show.
The Concerts in the Park series is presented by the Three Lakes Historical Society. The free concerts are held at the gazebo in Cy Williams Park each Tuesday evening through August 6 with different groups featured each week.
Attendees are invited to pack a picnic and a blanket or chair; concessions will be for sale. All proceeds benefit the Three Lakes Historical Society and Museum. In case of rain, the performance will be held at the Three Lakes High School auditorium.
For more information, call 715.546.2295 or visit www.facebook.com/ThreeLakesHistory

Find awesome listings near you!